Steph, a non-permanent, part-time staff member in the Commerce faculty, teaches both undergraduate and postgraduate courses in a department and in a service, soft-skills course. Having signed up for the six module, year-long version of the seaTEACH programme, she has successfully attended all the modules and has made concerted efforts to put her learning from these experiences to work in her classrooms.

Despite her obvious enthusiasm and commitment, Steph has really struggled to make the ePortfolio submissions.  In addition to struggling to find time to craft the submissions, Steph’s other work in the private commercial sector has strengthened her oral skills and encouraged her writing towards directness.  The kind of exploratory, reflective writing that the blog for the course requires is almost directly at odds with the other kinds of directed and directive writing she does elsewhere in her world.

One of the core principles of the programme is to meet academic participants where they are, responding to their strengths and opportunities, enabling their development as reflective practitioners in their classrooms and departmental contexts. This led me to think about how we could “tweak” the format so that Steph could begin to record the reflective work she is doing for herself and for others. Steph and I settled on trying to do her blogs as framed vlogs.

We had our first session recently –what a break through!  The woman who has struggled to submit anything for months became a vocal, highly reflective higher education practitioner.  The vlog took the form of a conversation. Steph loves to talk; she’s an inherently collaborative character who does her best thinking out loud with a peer and the vlogging process we designed tried to respond to this.  We had a loose plan for the session – a key focus and a trajectory from practice to theory and back. Rather than having Steph just talk to the camera, we did an interview, with me just off camera (doing the filming) and asking questions. Having walked some of Steph’s journey with her, I think I was able to provide the kinds of questions that led her to further insights into her own teaching and allowed her the opportunity to deepen her understanding and insight.

The next step is for Steph to choose little snippets of video she’d like to share publically on her blog and frame them with a little text. While I’m viewing vlogging as a kind of intermediate step to writing more comfortably about her practice, I’m quite excited about its affordances in its own right.  She unequivocally brings an energy and excitement to the vlogging process that is not as clear from her writing. Furthermore, vlogging allows for an immediate readjustment or fruitful redirecting of her ideas through the conversational element and immediacy of video. Finally, vlogging presents her ideas in a different mode, and present a more complete and nuanced version of herself to a wider audience. 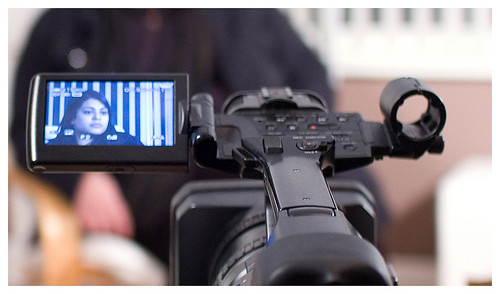